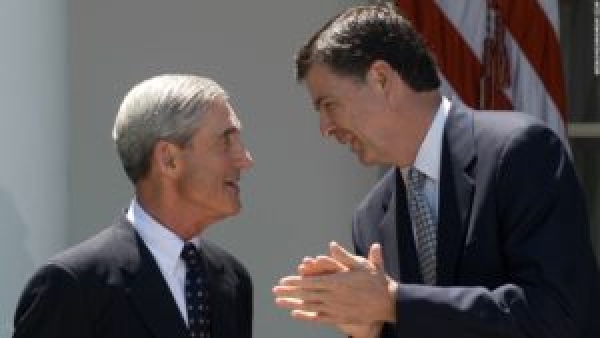 This was a response to reports alleging that the FBI discovered evidence of a Russian bribery and money laundering scheme in the U.S. prior to a decision by the Obama administration to give approval for the sale of a portion of the Canadian firm Uranium One to Russian energy firm Rosatom.  This deal resulted in transferring 20% of U.S. uranium stocks to the Russians.

This was previously reported by Breitbart Senior Editor-at-Large Peter Schweizer in his book Clinton Cash where he reported that the State Department, among other federal agencies, approved the transfer and that 9 foreign investors in the deal gave $145 million to the Clinton Foundation.  In addition, it's been reported by The Hill that the FBI discovered "substantial evidence that Russian nuclear industry official were engaged in bribery, kickbacks, extortion and money laundering" to increase Russia's nuclear holdings in the U.S. however, the DOJ didn't tell Congress or the public and didn't act on the information until 2014, after the sale and transfer were completed.

It's also been reported that the FBI found evidence that Russian official sent "millions of dollars" to the U.S. to be used as "donations" to the Clinton Foundation when Hillary Clinton was the Secretary of State and served on the government body that approved the deal.  In addition, the Washingt Post reports that the Democratic National Committee (DNC) and Hillary's 2016 presidential campaign funded Fusion GPS to put together the "Trump Dossier" of unsbustantiated claims against Trump by mostly Russian sources.

These revelations would seem to turn the "Russian Collusion" accusations against Trump around to implicate the Clinton campaign, DNC and Obama administration's FBI and DOJ.

The Journal goes on to argue:

The more troubling question is whether the FBI played a role, even if inadvertently, in assisting a Russian disinformation campaign. We know the agency possessed the dossier in 2016, and according to media reports it debated paying Mr. Steele to continue his work in the runup to the election. This occurred while former FBI Director James Comey was ramping up his probe into supposed ties between the Trump campaign and Russians.

and further recommending that congressional investigators focus on the FBI’s role:

All of this also raises questions about Special Counsel Robert Mueller’s investigation. The Fusion news means the FBI’s role in Russia’s election interference must now be investigated—even as the FBI and Justice insist that Mr. Mueller’s probe prevents them from cooperating with Congressional investigators.