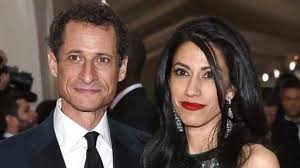 TruePundit.com | According to True Pundit, at least 5 emails among the 2,800 documents stored on Anthony Weiner's laptop that were release by the State Department, were determined to be classified.  Weiner's wife, Huma Abedin, was the deputy chief of staff to Secretary of State Hillary Clinton.  The emails apparently date from 2010, 2011 and 2012. Some of the emails were from a 'BBB Backup' address which one email identified as a backup of a Blackberry Bold 9700, presumed to belong to Huma Abedin.