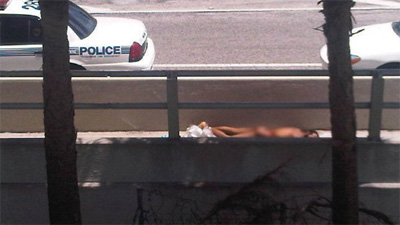 miami.cbslocal.com | Miami police shot and killed a man on the MacArthur Causeway Saturday afternoon, and police sources told CBS4 they had no choice: the naked man they shot was trying to chew the face off another naked man, and refused to obey police orders to stop his grisly meal.

The bizarre shooting happened shortly after 2 p.m., when police responded to a 911 call about two naked men fighting on a bike path along the Causeway, which was packed with traffic on a busy holiday weekend.

More in this category: « Real Preppers Are Not What Most People Think Building a Faraday Cage to protect against EMP's »
Login to post comments
Tweets by galtreport