Infowars.com | In a glowing review of the rising prevalence of high-tech big brother surveillance gadgets in police force use, the Associated Press reports that East Orange, New Jersey plans to cut crime by highlighting suspects with a red-beamed spotlight– before any crime is committed– a “pre-crime” deterrent to be mounted on nearby street lights or other fixtures.

Breitbart | A hair-thin electronic patch that adheres to the skin like a temporary tattoo could transform medical sensing, computer gaming and even spy operations, according to a US study published Thursday.

The micro-electronics technology, called an epidermal electronic system (EES), was developed by an international team of researchers from the United States, China and Singapore, and is described in the journal Science.

Infowars.com | The Department of Homeland Security will fund an effort by San Francisco to install real-time video cameras on 358 city buses, according to the San Francisco Chronicle. The existing system, installed a decade ago, stores footage on tape located on each vehicle.

The new surveillance system will use a wireless network “that will enable SFMTA personnel to view, download and store the captured video images wirelessly and view them in real-time or through the Internet.”

According to city documents, “the new system will provide real-time viewing of images, inside and outside the bus, by law enforcement officers, emergency responders and other authorized personnel on a real-time basis from a distance of about 500 yards in case the bus is hijacked and used for terrorism activities.”

In March, it was reported the DHS planned to introduce new mobile surveillance technology at train stations, stadiums and streets.

The new technology allows the government to “track your eye movements, capture and record your facial dimensions for face-recognition processing, bathe you in X-rays to look under your clothes, and even image your naked body using whole-body infrared images that were banned from consumer video cameras because they allowed the camera owners to take ‘nude’ videos of people at the beach,” Mike Adams writes for Natural News.

GlobalResearch.ca | During last spring's run-up to the reauthorization of three expiring provisions of the USA Patriot Act, Senator Ron Wyden (D-OR) charged that the administration and the FBI was relying on a "secret" interpretation of law to vacuum-up exabytes of data, including cell phone location records and internet data mining that target Americans.

In March, a written statement to the House Judiciary Subcommittee on Crime, Terrorism and Homeland Security by Justice Department official Todd Hinnen confirmed that the administration had used Section 215, the so-called "business records" section of the Act "to obtain driver's license records, hotel records, car rental records, apartment leasing records, credit card records, and the like."

Further confirmation of Wyden's charges came from an unlikely source: a White House nominee for a top counterterrorism position.

Last week Wired reported that Matthew Olsen, the administration's pick to head the National Counterterrorism Center "acknowledged that 'some of the pleadings and opinions related to the Patriot Act' to the secret Foreign Intelligence Surveillance Court that approves snooping warrants 'are classified'."

If confirmed, Olsen will replace Michael E. Leiter, the Bushist embed who told the Senate last year during hearings into 2009's aborted plot to bring down Northwest Airlines Flight 253 over Detroit on Christmas Day: "I will tell you, that when people come to the country and they are on the watch list, it is because we have generally made the choice that we want them here in the country for some reason or another." 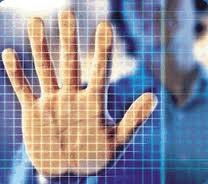 NEW YORK (WCBS 880) | New technology is helping hospitals get information about their patients without a single piece of paper.

Large stacks of paperwork and copies of your insurance card used to be what patients could expect when being admitted to the hospital. But now, all that information is right in the palm of your hand.

“It captures the vein pattern,” said NYU Langone Medical Center vice president Kathryn McClellan about the new machine. “We can immediately find you record. We don’t have to look up your social security number. We don’t have to put in your entrance information.”

Internet providers would be forced to keep logs of their customers' activities for one year--in case police want to review them in the future--under legislation that a U.S. House of Representatives committee approved today.

The 19 to 10 vote represents a victory for conservative Republicans, who made data retention their first major technology initiative after last fall's elections, and the Justice Department officials who have quietly lobbied for the sweeping new requirements, a development first reported by CNET.

A last-minute rewrite of the bill expands the information that commercial Internet providers are required to store to include customers' names, addresses, phone numbers, credit card numbers, bank account numbers, and temporarily-assigned IP addresses, some committee members suggested. By a 7-16 vote, the panel rejected an amendment that would have clarified that only IP addresses must be stored.

Boston Herald | Civil libertarians are raising the alarm over the state’s plans to create a Big Brother database that could map drivers’ whereabouts with police cruiser-mounted scanners that capture thousands of license plates per hour — storing that information indefinitely where local cops, staties, feds and prosecutors could access it as they choose.

“What kind of a society are we creating here?” asked civil rights lawyer Harvey Silverglate, who along with the ACLU fears police abuse. “There comes a point where the surveillance is so pervasive and total that it’s a misnomer to call a society free any longer.” 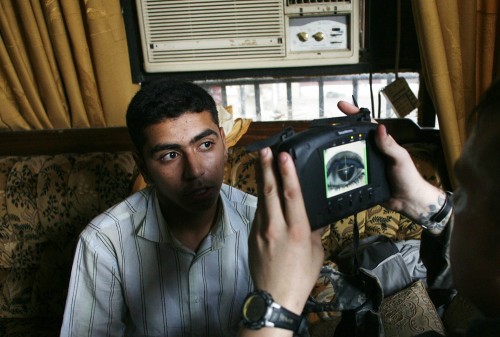 Reuters | Dozens of police departments nationwide are gearing up to use a tech company's already controversial iris- and facial-scanning device that slides over an iPhone and helps identify a person or track criminal suspects.

The so-called "biometric" technology, which seems to take a page from TV shows like "MI-5" or "CSI," could improve speed and accuracy in some routine police work in the field. However, its use has set off alarms with some who are concerned about possible civil liberties and privacy issues.

The smartphone-based scanner, named Mobile Offender Recognition and Information System, or MORIS, is made by BI2 Technologies in Plymouth, Massachusetts, and can be deployed by officers out on the beat or back at the station.

Owensboro Police will now be able to record evidence more accurately, and can do the job hands free, thanks to new technology.

Deputy Tom Whitford with the Daviess County Sheriff’s Office says doing his job without any back up or protection can get difficult.

Deputy Whitford uses a body cam, it’s only a few inches long and attaches to his uniform. Without it, he would not be able to prove cases like the one he just described.

Anything he sees and hears, gets recorded, downloaded, and then replayed instantly, either for evidence, or to confirm police reports.