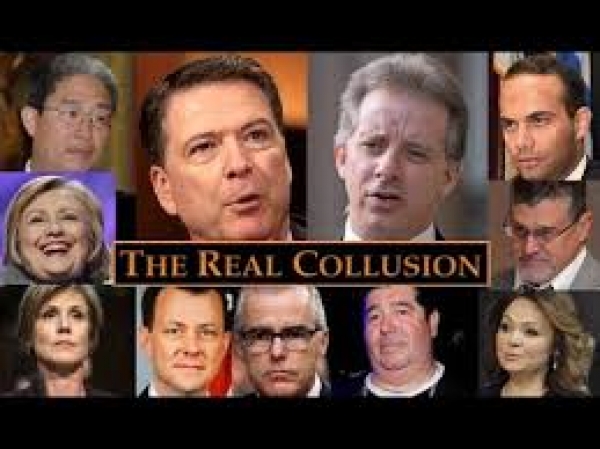 Perhaps the key 'Truth' of the story is stated right up front:

In a textbook example of denial and projection, Trump foes in and out of government wove a sinister yarn meant to take him down.

The article goes on to quote former President Obama, six days before the presidential election, addressing the Congressional Black Caucus:

There is one candidate who will advance those things,” he said, his voice swelling with emotion. “And there’s another candidate whose defining principle, the central theme of his candidacy, is opposition to all that we’ve done.”

Three weeks earlier, on June 15, the now infamous hacker Guccifer 2.0 had release a series of emails from the Democratic National Convention (DNC), showing that the DNC had conspired with candidate Hillary Clinton to undermine the candidacy of Bernie Sanders, confirming the suspicions of and angering his loyal supporters.

At the time, candidate Sanders was withholding his endorsement of Clinton although her nomination of the Democratic candidate was now a mere formality.

A few weeks later, on July 5 in Charlotte, N.C., during Obama's first stump speech for Clinton, he pledged to "pass the baton" to Clinton. President Obama's objective, in addition to attempting to win-over disgruntled Sanders supporters, was to provide a distraction from the FBI Directory James Comey's news conference on the investigation into Clinton's use of a private email server.  This was the now infamous news conference where Comey walked the American people through Clinton's mishandling of classified material only to then announce his decision not to charge her with any crime because she did not intend to violate the law.  However, it is not required by law to prove "intent" in the mishandling of classified material.  It's more like a recklessness similar to running someone over while going through a red light.

While candidates Trump and Sanders had been painting Hillary as the belle of Wall Street, the quintessential establishment candidate, the DNC Hack and Comey's email investigation and subsequent news conference only seemed to confirm in the minds of many that the laws of this country were only for the "little" people and not the establishment elite, like Clinton.

The article goes on to paint in-debth portaits of the major players to-date at the FBI in a section title "McCabe And The Lovers' including Andrew McCabe, Peter Strozk and Lisa Page as well as covering all the major players and thereby providing perhaps the most complete explanation of the entire "Russia Collusion" investigation to-date.

On July 5, the day of Comey’s press conference on Clinton’s emails, a former British spy, Christopher Steele, flew to Rome to meet an old FBI contact. The information he brought had weighty implications for the impending investigation. But neither the information nor the implications are what we have been led to believe.

This is a comprehensive MUST-READ for anyone looking for real answers.

More in this category: « President Trump's Speech at CPAC Assault On The Constitution »
Login to post comments