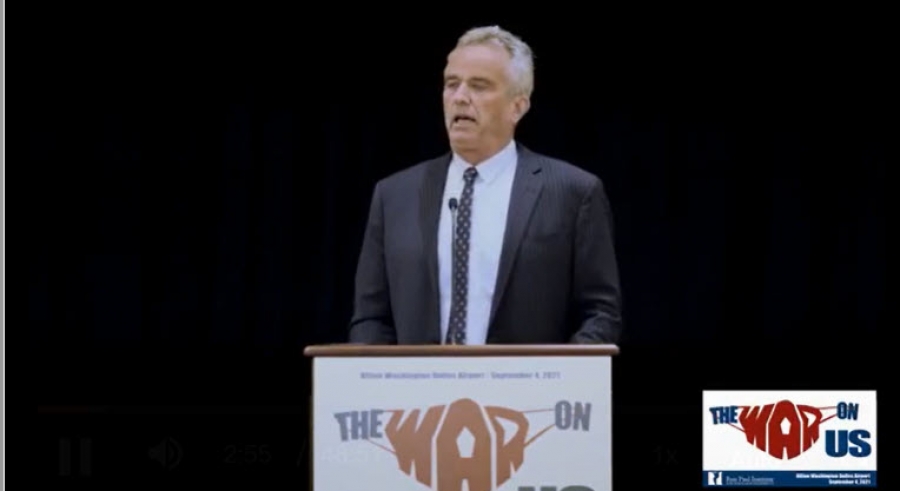 RonPaulInstitute.org | Robert F. Kennedy, Jr., delivers a compelling indictment of the mad push to total control in his appearance at the 2021 Ron Paul Institute Washington Conference.P

You can do this in any system...all you need to do is invoke fear...you tell the people they're under attack and you're the only one that can save them and anyone that disagrees with you is a threat to the comonwealth and they will do anything you tell them to do.

I don't consider myself a conspiracy theorist...It's tought to imagine how anybody could have planned this but then I stumbled upon these simulations...many of you saw the simulation that took place at 201, event 201 in October of 2019...the people who took part in that simulation were the Deputy Director of the CIA, Avril Haines...Bill Gates...who financed it...people from the social media groups...people from the biggest pharmaceutical companies...people from global PR companies...and health official from all over the world...

If you can treat somebody before they leave their home...you want to tream them at home...and what was our protocol?...no treatment until you go to the hospital...then your treatment are two things that are bound to kill you...ventilators and Remdesivir...and Tony Fauci knew Remdesivir would kill you...he knew that becuse in 2019 he tried to use it for Ebola and within 5 days of treatment it gave lethal side effects to 54% of the people and the satey monitoring board ordered him to terminate the use of that drug...and he threw a phony...contrived...absolutely fraudulent study that he manipulated and orchestrated to get that drug made standard of care...it is homicide.

He denied them deliberately, purposefully, access to the things we know that work because 248 studies show they do...which is Ivermectin and Hydroxychloroquine...they denined to all the people in the nursing home.